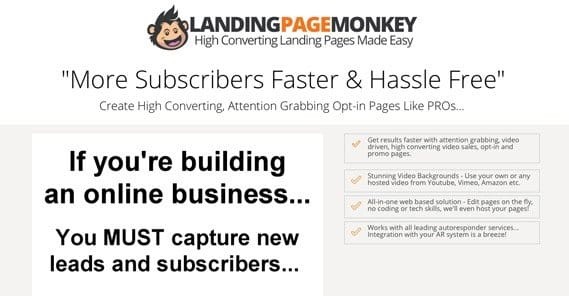 Landing Page Monkey – found here is one of a dozen or so pieces of software designed to help you create a landing page, squeeze page, or sales funnel. The idea is to eliminate the need for a coder or designer by using templates and modular code. What you lose in paying for the service, you make up for in saved time and money you would have spent on a developer.

So what does Landing Page Monkey have going for it?

There are only a few drawbacks to the system as a whole. For one thing, the primary selling point – full video backgrounds – doesn’t work on mobile devices. This is to be expected, as video is a large bandwidth drain and they don’t want to harm mobile users. There’s a fallback system in place, but if a video is essential to your landing page, the mobile version is a little flat.

The lack of provided templates makes it slightly less beginner-friendly than some alternatives. However, templates do exist; they just need to be created and shared by other Landing Page Monkey users.

We're the review team from Pig Reviews! Here you gonna see daily reviews from internet marketing products! The best review you'll find here...thanks so much for your visit!

We use cookies on our website to give you the most relevant experience by remembering your preferences and repeat visits. By clicking “Accept”, you consent to the use of ALL the cookies.
Cookie settingsACCEPT
Manage consent

This website uses cookies to improve your experience while you navigate through the website. Out of these, the cookies that are categorized as necessary are stored on your browser as they are essential for the working of basic functionalities of the website. We also use third-party cookies that help us analyze and understand how you use this website. These cookies will be stored in your browser only with your consent. You also have the option to opt-out of these cookies. But opting out of some of these cookies may affect your browsing experience.
Necessary Always Enabled

Any cookies that may not be particularly necessary for the website to function and is used specifically to collect user personal data via analytics, ads, other embedded contents are termed as non-necessary cookies. It is mandatory to procure user consent prior to running these cookies on your website.